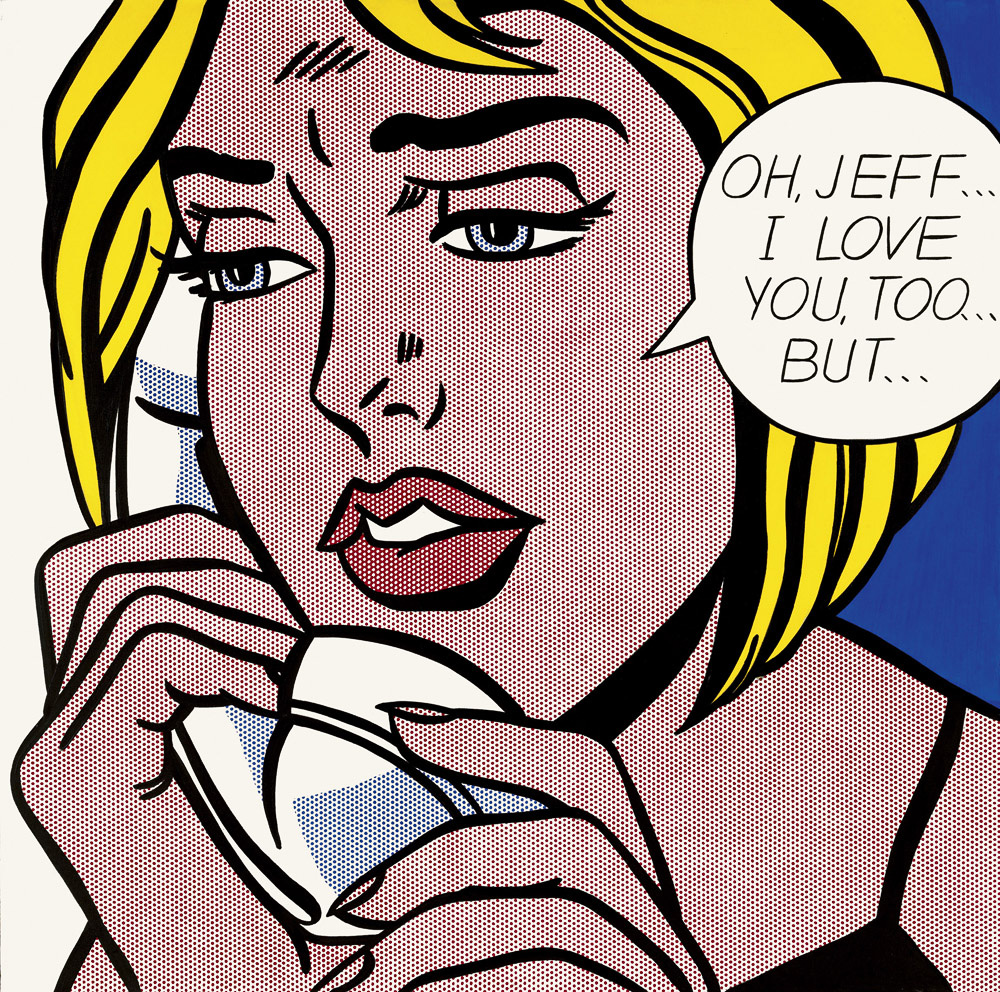 Not to be missed! "Lichtenstein: A Retrospective" Exhibition Review at Tate Modern

By junesees22nd February 2013May 13th, 2017Exhibition Review
No Comments

Before this exhibition, my fiance and I kept teasing each other with Lichtenstein’s stereotypical female quote. Which goes like this:

Referencing Lichtenstein in our jokes, parodying him, this shows that our generation know all too well about Lichtenstein; his comic strip paintings, explosion sculptures, the trademark Benday dots. We take him for granted.

I never had the opportunity to see the works of Lichtenstein in the flesh so when I heard that an upcoming retrospective of Lichtenstein’s work coming to Tate Modern, I was really intrigued and excited. And I wasn’t disappointed.

Roy Lichtstein was the most influential American Pop Artist of the 20th Century. In the 1960s, his works of art caused a controversy and delight with his idea of abstract expressionism and heavily inspired by comic strips, crude drawings of advertising and mass culture imagery.

This exhibitions aims to show his early works, famous pieces, as well as his later works before his death in 1997. What I do like about the curatorial decision was that the rooms are not entirely chronological (except for the later rooms) but instead a basing the rooms on the common subject matter.

As a painter, I really liked his controlled, deliberate Brushstroke paintings. I understand the joke. The misrepresentation of gestured brush stroke. The fact that he avoided photographic techniques and painted them by hand, I have to admire.

Look Mickey 1961 and Sponge 1962 are his early pop paintings. One of the first inspirations of comic book and visual adverts.  Looking closer at Sponge 1962, there was inconsistency with the Benday dots caused by his early technique of drilling holes in aluminium sheet.

I really like the isolation of everyday functional objects in his Black and White paintings. They look so abstract with the heavy outlines and graphic rendering of the Benday dots. Also Lichtenstein created objects and sculpture: teacups, bust of a women, sculptures inspired by the roar of Art Deco and mimicry of art movements.

Also we get to see the comic book strip Lichtenstein based his Whaam! 1963 painting. I heard the  curator found this item and brought it off Amazon. I compared the differences Lichtenstein made in the final artwork, from the slight angle of the speech bubble to the deliberate colour change. I noticed the context of the comic strip and painting had changed, heightening the drama.

I had to laugh at the cliché female role but gaze at the enormity of his paintings. Really intensifying the mundane or high emotional moments for the females, war and explosions for male role.

Lichtenstein engaged with previous art movement styles such as likes of Picasso and Matisse. Even included his own works, such as the recognisable golf ball in the background in Still Life with Goldfish 1972. He also continued with this theme of ‘Art within Art’ on a large-scale in this Artist’s Studio paintings. Larger than my own studio wall!

I really liked the Perfect/Imperfect series, the idea of having the line continue outside of the canvas ever so slightly is simple beautiful.

Later in his career, Lichtenstein broached the subject of nudes, returning to the female form. However he did not use live models but returning back to his comic clippings and literally undressing them, by imagining their bare bodies under the clothes before painting them nude. Never before these paintings, along with Chinese Landscapes, have been exhibited in the UK.

I’m glad that this exhibitions is not focussed on his enlarged comic strip paintings but does more than that. This was an opportunity to show Lichtenstein as an Artist and what a remarkable man he is.
OVERVIEW: Attractive, bold and cleverly curated exhibition with the opportunity to see his life’s works in all one place, fully appreciating Lichtenstein’s status as Artist. A rare look at his Nude Paintings, Chinese Landscapes and sculptures are definite MUST SEE. This exhibition is really not to be missed.

For public information and tickets go to www.tate.org.uk

Disclaimer: All images posted in this review belongs to Tate