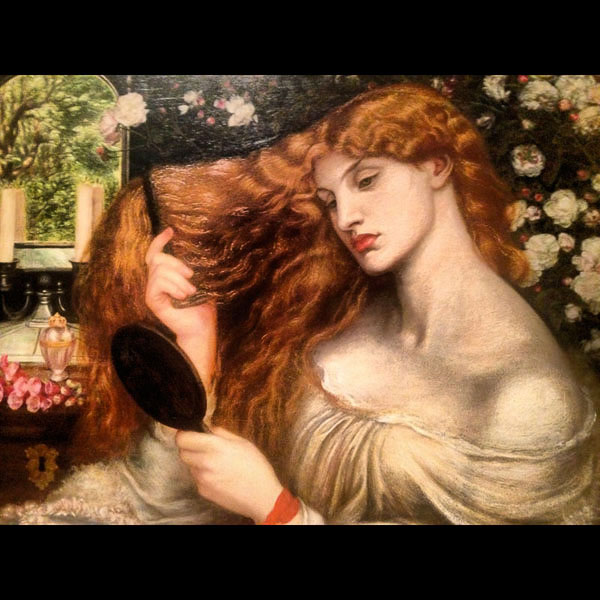 Who doesn’t know Millais’ ‘Ophelia’? That iconic lovelorn haunted woman in the water. Or Rossetti’s ‘Lady Lilith” rouge lips and long auburn hair? Can you believe the Brotherhood of the Pre–Raphaelites were controversial during the Victorian period. Rightly so, they are now deemed the status of avant-garde, after so many years.

Personally, I ♥ the Pre–Raphaelites, they play a significant part in my illustrations. They are my inspiration when it comes to painting; single narrative told on the canvas, from the symbolism hidden in the background to the beauty of woman in the foreground.

When I entered the exhibition at Tate Britain, I was not disappointed. The classic rouge walls are back and so were 180 works by Dante Gabriel Rossetti, William Holman Hunt, John Everett Millais, William Morris, Edward Burne–Jones and so many more.

What makes this exhibition different, was the ideals about art and society are very apparent. I really love the portraits of the members of the Brotherhood, I believe some were drawn by once another. So similar to the hellohead: live portrait event I did last month. 🙂

I really liked the drawings, sculpture, photography that was on display, they all added dimension to the Brotherhood; shown they were not afraid of changing times but embraced it. But, what I really love about the exhibition was the least familiar artists having their moment to shine.

Ford Madox Brown’s ‘Take your son, Sir’ really caught my eye. There is something haunting about a piece of painting, unfinished. Even more so,  because Brown’s discontinued with the painting when their son, Arthur, died at 10 months old.

I was delighted to see the works of William Morris, which many Pre–Raphaelites artists were a part of. From the textile tapestry by both Morris and Burne-Jones

Of course, Hunt’s interpretation of ‘The Lady of Shalott’ is clearly one of my favourites, that includes the colour palette which you can see a close up below.

OVERALL: It is beautifully curated and each rooms are a delight to see. With all the works together, you can really immerse yourself into their world of beauty, salvation, sentimental and mythology. Not only showing the most popular works but a rare look at paintings that have unearthed. Definitely worth seeing now the games have finished.

Just to be clear: Some of you may know,  I work part-time at a gallery. However, I am fair and unbiased. I have got opinions about exhibitions since that’s where I spend the majority of my time alongside my illustration. I am not paid to do this, I do this review because I purely love art and I want to show you guys, my journeys and my inspirations, simply put.